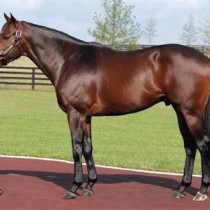 The most recent weekend’s racing in the U.S. was highlighted by an epic Metropolitan Handicap (gr. I) duel between Shackleford and Caleb’s Posse. However, it also featured a notable achievement by a former Metropolitan Handicap victor – Ghostzapper – who was represented by graded winners on all-weather, turf and dirt. On Saturday, at Woodbine, Ghostzapper’s five-year-old son, Hunters Bay, made his stakes debut, and ran out a three lengths winner of the 8½ furlong Eclipse Stakes (gr. III), while narrowly missing the Woodbine track-record.  Monday at Belmont Park was even more auspicious through the achievements of pair of Ghostzapper three-year-old fillies, Better Lucky, who captured the Sands Point Stakes (gr. II) on her turf debut, and Contested, who recorded her fourth straight win in five starts, with a dominating five lengths victory in the Acorn Stakes (gr. I).

A son of Awesome Again – Baby Zip by Relauch, Ghostzapper was, for our money the best U.S. dirt runner since Holy Bull, a decade earlier, and arguably for even longer period. He won nine of 11 starts, including the Vosburgh Stakes, by 6½ lengths as three-year-old against older horses; the Tom Fool Stakes (gr. III), by 4½ lengths, the Philip H. Iselin Breeders’ Cup Stakes (gr. III), by 10¾ lengths, the Woodward Stakes (gr. I), in a memorable battle with subsequent Horse of the Year Saint Liam, and the Breeders’ Cup Classic (gr. I), by three lengths in a new track-record, at four; and the Metropolitan Handicap (gr. I) 6¼ lengths in his only start at five. Ghostzapper began his stud career at $200,000, and the fact that he was advertised for 2012 at $20,000 live foal reveals that the highest expectations have not been met. Indeed, in terms of success to opportunity, the Champion has been overshadowed by his older and initially far less-heralded half-brother, City Zip.  Still, while he may never again warrant a six-figure stud fee, the record is beginning to indicate that Ghostzapper Is a very usable stallion at his current asking price.

Ghostzapper now has 17 stakes winners, eight of them graded from his first three crops. The first crop, now five, has yielded nine stakes winners from 81 named foals, including the Blue Grass Stakes (gr. I) captor, Stately Victor; the previously mentioned Hunter’s Bay, who looks a contender for older horse honors in Canada; Pacific Ocean, who took the Vernon O. Underwood Stakes (gr. III); and the Turnback the Alarm Handicap (gr. III) winner Arena Elvira. So far there are only three stakes winners from Ghostzapper’s second crop, headed by Matthewsburg, who took Kentucky Cup Sprint (gr. III), but the third crop features five black-type winners, including not only the weekend stars Contested and Better Lucky, but also Italian group winner United Color, and Judy the Beauty, winner of the Shady Well Stakes and runner-up in the Spinaway Stakes (gr. I).

Looking at his two grade one winners, Contested (dam by Arch) and Stately Victor (dam by Dynaformer’s grade one winning daughter Collect the Cash) (both TrueNicks A+), we can note that they represent two of the 13 starters sired by Ghostzapper out of Roberto line mares. This follows a trend established by Awesome Again, who has three stakes winners from 30 starters out of mares by sons or grandsons of Roberto. We can also note that Contested and Stately Victor both have In Reality in their pedigrees. This is rather intriguing, as one aspect of Ghostzapper’s pedigree and stud career that is interesting is that he himself is a complete outcross through five generations (and by a stallion that was also almost an outcross at that distance, his sole duplication at that distance being Native Dancer 5 x 5), and is in a program that strongly favors outcross matings. In Reality – grandsire of Ghostzapper’s dam –  who was inbred 3 x 3 to War Relic (himself inbred closely to two of the grandparents of Man o’War) is most intensely inbred individual in the first few generations of Ghostzapper’s pedigree. Perhaps, therefore, it’s not coincidence that In Reality already appears in the dams of five of Ghostzapper’s stakes winners, and as far duplicating In Reality within four generations, it’s found in three Ghostzapper stakes winners from only 10 starters.

A look at the pedigree of Contested reveals another inbreeding and linebreeding trend. Her second dam is by Seeking the Gold (by Mr. Prospector), that same horse appearing as sire of the dam of Better Lucky (TrueNicks A). The cross of Ghostzapper over mares by Mr. Prospector, and his sons and grandsons has produced six stakes winners from 54 starters (11%), with the other successful broodmare sires being Twining (Forty Niner branch, and from the immediate family of Arch, the broodmare sire of Contested), Smoke Glacken and his sire, Two Punch, Unbridled  and Gulch. Overall, Mr. Prospector is duplicated in 10 of Ghostzapper’s stakes winners, and seven of his eight graded winners, at within four generations, Mr. Prospector appears in nine Ghostzapper stakes winners, from only 85 starters.

We would also be remiss if we didn’t note that in addition to some marked pedigree trends, Ghostzapper appears to respond extremely well to racing class in his mates. Two of his stakes winners are out of grade one winners; six more out of grade two and three winners; and another three out of listed winning mares. With that in mind, he might be an interesting value for money play for a breeder with an older class racemare, with the right pedigree.